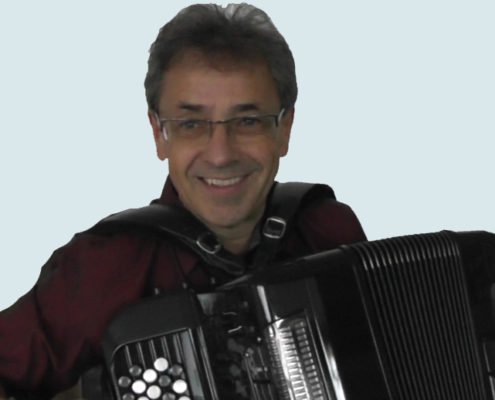 🇬🇧Milan Novotny  is a Czech-Swiss musical pedagogue, composer and accordionist.

Born in 1955, in České Budějovice, where he spent his childhood, was educated and began learning accordion in this historic city of Southern Bohemia, Czechoslovakia.

After his schooling, Milan Novotny entered the Conservatory of Pilsen where he acquired a complete training as a musician and teacher.  He is particularly passionate about the branches of musical techniques and composition including harmony, musical analysis, counterpoint and teaching pedagogy.

In 1977, he was admitted to the prestigious musical academy Franz Liszt in Weimar, in the German Democratic Republic. He studied in the classes of Irmgard Krieg and Ivan Koval. He completed his musical academic studies in 1981 by obtaining his Master’s degree, which attests to the end of studies of pedagogue and concertist graduate.

Arriving in Switzerland in 1982, he settled there permanently and became the teacher of the first accordion class of a conservatory in Switzerland. He led his class and taught the accordion to several hundred musicians until his retirement in 2015. For several years, he also taught in parallel with the Gstaad Music School. This period was conducive to composition and Milan Novotny wrote many original scores for accordion, small ensembles as well as teaching methods for teaching.

Currently, he dedicates himself to composing and publishes his works which are available on www.arteson.ch

Any cookies that may not be particularly necessary for the website to function and is used specifically to collect user personal data via analytics and other embedded contents are termed as non-necessary cookies. It is mandatory to procure user consent prior to running these cookies on your website.